Skip to content
Posted on December 29, 2013 Posted in Books6 Comments

Aside from flat shoes, bags and clothes, these books have taken away a significant amount of my hard earned salary. They were my everyday commuting companions, partner in bed (heehee), source of both sadness and happiness and one of the reasons why I still have something to blog.

All books were purchased from my personal money, except John Green’s Looking for Alaska. If I sum the expenditures, I could have already purchased a nice set of my much coveted pearl earrings, weekend stay in Tagaytay, new mobile phone to as much as a promo fare ticket to Hong Kong, Macau or Malaysia. Now this gives me some feelings of regret? 🙂

Setting aside the expenditures, my personal target is to finish a book in a month. This pile of books is my shouting evidence that I made it. I might be unsuccessful in other things but with my reading target, I was able to exceed my personal expectation. The only thing I failed to accomplish is to blog and review each. Blame my laziness and dissatisfaction to a few. I still made reviews with unsatisfactory ratings but the rest received nothing but my appreciation.

For 2014, I intend to sustain the same target. I hope to finish at least 12 books next year. While I still prefer my paperbacks, I would love to utilise all the e-books stored in my iPad. It can save me enough  money and space inside my bag. My only problem with e-books is that I can’t read them during my commuting hours. I can’t take out my iPad inside the jeepney that passes through Quiapo and Recto Avenue. (My fellow Pinoy commuters can relate.) If I read inside the train, I will gain sharp glances from fellow passengers. They will think of me as someone who just wants to brag her Apple device. If I read in bed, my eyes get easily exhausted with the built-in light. On weekends, I always end up sleeping during the lazy afternoons.

Whether in print or electronic, my love for reading will remain. I’m looking forward to discover more titles and authors to inspire and keep me company.

In my wishful thinking … maybe I can write one someday… Fine, I need someone to slap and return me back to reality 🙂

More than a pile of books, 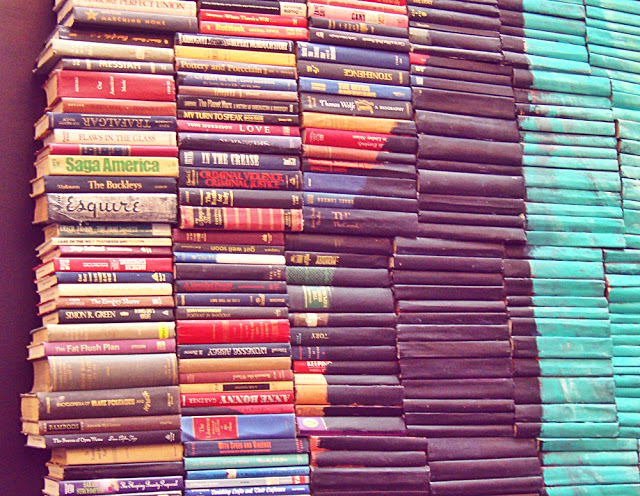 what you can see is a pile of masterpiece 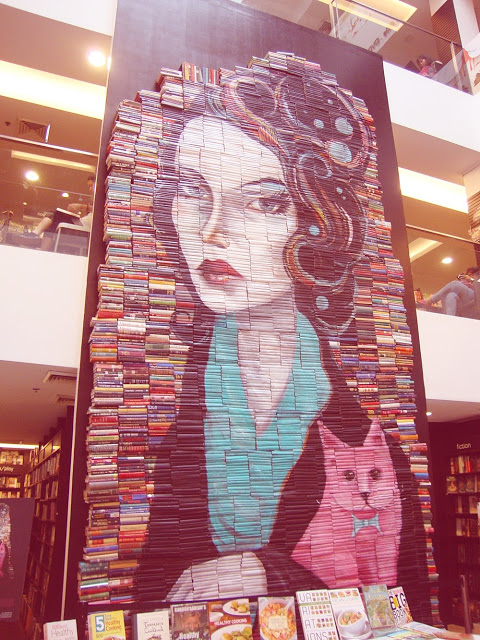 This masterpiece can be found in the main branch of my favorite bookstore, Fully Booked’s High Street.

Even the lead artist has an admirable story to share.  Learn more about him  here.

I’m struggling to write a review for this book. I guess it’s because I can’t clearly decide whether I like or dislike it. One thing I’d like to say is that contrary to most expectations, THIS IS NOT A HORROR story. It’s nearer to suspense and mystery.

The book’s title gave me the impression that it’s Miss Peregrine who serves as the lead character. Surprisingly, a teenage kid named Jacob was responsible for fueling the entire story.

Jacob has been fascinated by the stories of his grandfather. His grandfather has been showing him pictures of the peculiar children and all the stories attached to it. Jacob soon developed doubts about his Grandfather’s stories. His life further became complicated when his Grandfather’s life ended in a mysterious death. Unfortunately, Jacob’s quest to find  answers made him worst in the eyes of his family. He was accussed of becoming mentally ill. In the course of his treatment, Jacob was allowed to set off to an island that his Grandfather was referring. He was bound to find Miss Peregrine and all the peculiar children that he used to see in pictures.

Plot and story wise, I’d like to give Ransom Riggs 3.5 out of 5 stars. More than the interesting storyline, I feel that it’s the suspense and mystery that drew my interest. It’s the questions that are waiting to be answered that made me held on to this book. Each chapter yielded chain reactions that created more attachment to the readers.

I’m not sure if it’s true but I read somewhere that the original plan was for Riggs to release a photo book. Since he acquired vintage photos from everywhere, he was set to showcase his collection. However, Riggs was later encouraged to write stories about each photo. Soon, Riggs was already writing a literary piece. If this is really true, I’d like to render my hats off to Riggs. He was able to weave a literary piece from pictures that don’t belong to each other.

As for character development, this is another angle that makes me undecided. I don’t have apprehensions about Jacob’s development. As more answers and mysteries are unfolded, Jacob’s character transformed and strengthened. My apprehensions lies on some issues that I wish Riggs could have explained. I was hoping that Riggs could explain the origins of each peculiar children and Miss Peregrine. How did they become peculiar? Why is it that some kids ended up peculiar in the story’s point of view?

My unresolved sentiments further intensified when I discovered the story’s ending. I felt like I was dragged in the sea of uncertainty. The ending gave me another open ended question. So what will happen next? Though after reading some interviews from Riggs, I have a feeling that the book will have a sequel.

Overall, I would give this book 3 out of 5 stars. If you prefer a lighter dose of suspense and mystery, then this book is for you.

PS I heard Tim Burton will bring this book to the big screen. 🙂

After so many months, I’m finally done with my second book from John Green. I received this book as a birthday gift last December.  Back then, I was still reading another John Green, The Fault in our Stars.  If I remember it right, I started this book last February. Blame everything on my recent addiction to some Korean drama series. 😉 Reading took a step back as I always spend the entire night with my DVD marathons. Now that my supply of drama series is dwindling, I went back reading. Hence, this post finally made it.

During my first encounter with the book, I thought that Alaska was treated as a place. Turns out, Alaska is a person.  The book related the story of a group of young college students in Culver Creek. The lead character is Miles, who was almost a loner during his high school years. (I can relate!) When he went to a college boarding school, he found himself in the group of Colonel, Takumi, Lara and Alaska. Miles’ group was responsible for tagging him as Pudge, which became his identity in the course of the story.

The story was divided to two parts, before and after. I won’t relate the dividing line between before and after. Everything evolves on Pudge’s attempts to find answers. Pudge and his group’s journey to solve a mystery led them to answers, that demanded more meaning and understanding.

The book became a recipient of the 2006 Michael Printz Award (best book written for teens). This should have been a plus factor but for some reason, I often end up rendering lesser appreciation for award winning literary works. In this case, allow me to discuss my personal view.

If the originality and novelty of the story will be graded, I’ll give John Green 3 out of 5 stars. For me, Looking for Alaska relates a typical coming-of-age story. The story reminded me of movies such as St. Elmo’s Fire and With Honors. Not of similar plot, but they all carry similar a theme. The story’s structure is not really something new for me. As I see it, the events that transpired in Looking for Alaska can happen to anyone. However, John Green compensated by emphasizing his trademark of powerful words. John Green is one of the few writers who can narrate an ordinary story in an extraordinary way. Each chapter is enriched with heart-warming words that leaves readers with that rare emotional trail.

As for character development, I guess this is where John Green excelled. He created characters whom everyone can relate too. John Green can place you in the shoes of the characters, who can be your complete opposite. I was always a shy and reserved person in my schooling years so I never understood students who always engage themselves in trouble. But when Pudge, Colonel and Alaska’s dangerous escapades were presented to me, I didn’t find it disturbing and annoying. Everything appeared to me as a typical and accepted teenage-adult transition.

Overall, I would give Looking for Alaska as 4 out of 5 stars. It’s a typical story that has been empowered with compeling words and excellent character development.

After so many weeks, I’m finally done reading this book.

Let me identify the lame reason why it took me so long to finish this book.  I bought it in time for the holiday.  Before my long awaited work break, I was forced to attend a number of Christmas parties and I was rushing some teaching works.  (This made me remember that I have papers pending for checking. Goodbye piggy life days!) I always come home late and as a result, I have nothing to brag except for my sleeping hours.

My favorite place to read is whenever I’m inside the train. Unfortunately, I was always sleepy over the past months. The last reason why I wasn’t motivated to finish the book is because my cousin accidentally relayed to me the core of the story.  I was successful in preventing myself to google the story’s ending. But destiny played some naughty games with me. Instead of getting annoyed with my cousin, we actually just laughed about it.

My expectations for this book was way different from the story.  I thought the book was some ordinary teenage beach read.  I thought of it as a light read that can entertain and tickle my hopeless romantic hormones.  It was surprisingly a deep and moving story of an ordinary teenage kid who decided to overcome an extraordinary experience.

What I appreciate most about the book is the raw and shallow presentation of everything. The words used were so direct and simple.  The entire story was presented in the eyes of an innocent kid who is crossing the bridge of his teenage years. I guess another reason why I love the book is because I can see myself in one of Charlie’s experiences.  Charlie struggled with issues on sex, drugs while balancing friends, family and schooling.  One of Charlie’s experiences I can perfectly relate is his observations about his family. This particular line made me laugh for a while

I am very interested and fascinated by how everyone loves each other but no one really likes each other.

This perfectly works in the case of some of my relatives.

What makes the book unique is how Charlie narrated his life. The entire story was related through a letter. Charlie was writing letters to an anonymous friend. What makes Charlie’s ordinary life turn extraordinary was his experience that affected his entire growth. Unfortunately, this was the part that my cousin accidentally blurted out to me.

If I would rate Stephen Chbosky’s book, I’ll give it 4 out of 5 stars. I love the story, the presentation and what was supposedly an unexpected ending.  Even though  I wouldn’t know the ending, I believe that I will give the book the same excellent rating.