The long weekend is about to end. Six more hours it would be Wednesday and everyone is back to work again. In my previous post, I enumerated the things I wanted to accomplish.

In the four workless day, here’s a list of what I wanted to accomplish

2. My hair treatment preferably on a Saturday

4. Exercise to finally jog and lose those humps and bumps

5. A nice dinner with my friends and family

And the results of my four day workless weekend,

5. Nice dinner with family and friends – PARTIALLY  ACCOMPLISHED! My friend refused to join me to our long planned Banapple meal because of the crazy weather. I was already dressed up when my friend suggested not to push through. One of my friends who promised to text me last Monday for a mall meal treat failed to even send me a text message. I hope she’s fine.

6. shopping – YES! I WAS ABLE TO BUY MY DREAM LOAFERS LAST FRIDAY. I guess it’s really better to do things on your own.

While most of my friends and colleagues will be enjoying the long weekend, I am on the contrary spending the next four days at home to finally finish that long overdue paper.

Yes it was a payday weekend but you see I was expecting more from my payroll account. Speculations about our performance incentive bonus has been an unanswered question in the last two weeks. When will it be released? I am as equally excited to receive extra money to set aside for savings, a treat for my parents, a pair of shoes for my Dad (), and my annual hair treatment. I own the worst hair type in the family and only that unending iron pulling process can give me that most coveted long straight hair.  Please give us our money, please…

In the four workless day, here’s a list of what I want to accomplish

2. My hair treatment preferrably on a saturday

4. Exercise to finally jog and lose those humps and bumps

5. A nice dinner with my friends and family

To my fellow Filipino working slaves, I hope you’ll enjoy your long weekend. (Oh I think I should be telling that to myself 😉 ) 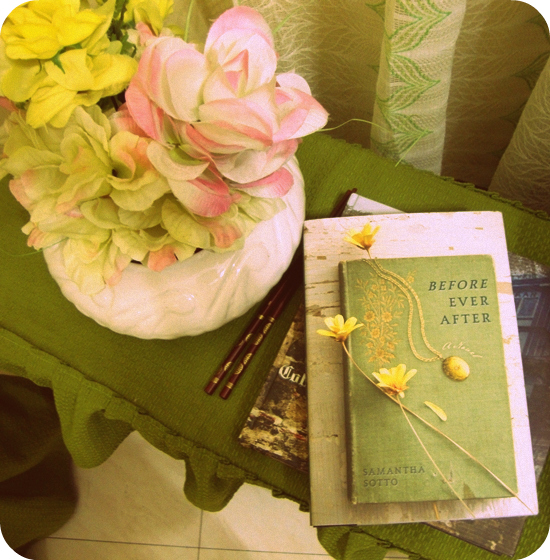 Posted on August 14, 2011 Posted in Career, Life, WorkLeave a comment

As of this time,  I’m stuck in this place.

I am supposed to finish my long overdue paper which would shape my fate on the next months. But distractions keep coming in. The noisy choir and the slow internet connection, when will I be able to finish my task? When will I ever say mission accomplished? Will I ever?

It took me days before I became adjusted with the job. My previous job as a Researcher and preparing the MOPP both meant writing, but there’s a great deal of difference between them. Research meant marrying creativity and simplicity. Writing researches entailed translating numerical figures to words and threading them to interesting and useful pieces of information.  Writing the MOPP meant clarity, simplicity and strict compliance to a format. If you were trained as a Researcher or a Literary Writer then mark my words, preparing the MOPP will bore you to the fullest.

In my almost one year of writing the MOPP, here are some lessons I have learned.

1. Every service or task should be time bound – If the management of any organization dreams of offering real quality service, the MOPP should consider the element of time. This means that part of the policies and procedures should state how many days a particular task should be performed. For example, in processing a particular document, in evaluating a request, in approving the budget, the MOPP should state the exact number of days needed  in completing these tasks. This would force offices and employees to innovate and comply with what is expected from them. Follow ups and delay of task, especially for other departments who need the output of another department to function, would be lessened if the MOPP is strictly enforced.

2. Never or as much as possible avoid using adjectives and adverbs – Adjectives and adverbs sometimes provide an abstract and subjective picture of what should be expected.  Instead of using adverbs and adjectives, the MOPP should state and clearly define what is expected from any office.  An overused term in the MOPP is quality.  Reports presented should be of high quality.  What may be of “high quality” to the service providers may be not of “high quality” to the users. Instead of using quality as an adjective, state the organization’s standards or elements needed in a quality report. What should be inside a quality report?

3. Use simple words – The main purpose of the MOPP is to provide a reference of what should be expected from the organization, every office to each employee. Hence idioms,  highfalutin and dramatic words do not have a space in the MOPP. Words used in the MOPP should be formal, simple and easily understood by every member of the organization.

4. Policies should have a basis for its existence – Policies were created for a reason. Hence, all formulated policies should not arise from nowhere. If for example, the management prevents employees from bringing USBs and other storage devices in the workplace, there should be an underlying reason. The organization is perhaps  preventing the spread of confidential files outside the organization. If the management forces its employees to consume their vacation leave credits, then the purpose of such should be well explained and justified in the MOPP.

5. Policies should not conflict with the interest of other offices – This principle is so common sense but more often than not, it is ignored by offices in actual practice.

Consider this example; a company’s thrust is to become an effective and efficient paperless community.  One of its policies is to refrain from using excessive papers for documentation and other processes. The management encourages coordination with the IT Department in building programs and systems for requisition, approval and other basic functions. Some departments however have policies that require excessive signatories and approval from the immediate supervisor, department head, division head to the Vice President, before a certain request or document can be processed.  Does it sound familiar to you?  How can the company avail to its objective of becoming a paperless community, when some of the office’s policy does not seem to support it.

6. Policies are designed to create order – This is the basic reason why policies exist in the first place. If a policy breeds conflict and confusion among employees and clients, it’s either the policy has loopholes or boils down to the lame reason that it is not properly implemented. There maybe other reasons why policies turn out to be a nightmare for organizations. But so far, these two are the common faults I have observed.

Frequent policy loopholes I’ve encountered include the absence of appropriate  sanctions in the event of violation and lack of authority who will oversee the implementation of the policy. Aside from sanctions and penalties, development and improvement efforts so as to prevent the occurrence of another problem are not done. In effect, employees see the policy as a lame and idle document. It doesn’t serve its purpose so why bother to abide with it.

So far, these are what I have learned from almost a year of doing the MOPP. I’m sure, I will learn more on the next months. Learning unfortunately does not come in the most favorable approach. I should expect to learn things through problems and conflicts that would arise. I may sound too pessimistic but as they say, experiences specifically bad experiences is one of the most effective approaches in teaching and learning. For now, allow me to say my silly realization in this job, rules are not free from rules. And when something is wrong with the rules, it’s not the rules that are penalized and sanctioned. It’s the employees, clients and the entire company who suffer from poorly drafted and implemented rules. So which way would you choose? Follow the rules in creating rules or suffer the consequences of not following the rules in creating rules?