Styling is definitely not my turf.  Like a typical member of the female populace, I love shoes, bags, clothes and accessories.  But mixing, matching and experimenting with them is not my piece of cake. I love shopping but oftentimes,  I settle for those “safe” and typical pieces.  How I wish I would one day be courageous enough to go out of of that comfort zone.

I work for an organization that requires me to wear a uniform. I am not really against it but at some point, being in uniform makes me feel dull and boring.  To break the monotonous spirit, I usually energize myself with accessories.  Just to share with you, here are some of my favorite accessories that I wear from time to time..

My Esprit and DKNY watches, bought from my own hard earned money. Though I have a tiny wrist, I really prefer big and bangle type watches. For some reasons, I am convinced that these watches fit well in jeans and even in corporate attires.

I wear a pair of pearl earrings, a bangle and a gold ring ever since I started working.  The pair of pearls fit well casual and formal attires, that’s why I settle with them. The gold ring has been with me ever since I was eight years old. It was a gift from my Tita.

I definitely can’t go out without any necklace.

This was an impulse buy I made last 2009 at Simple Joys SM Manila. It was love at first sight. A caged bird? I feel it was me in some ways..

Have you watched the Taiwanese version of the Meteor Garden? If yes then you must remember this

This was the necklace given by Dao Ming Si  (Jerry Yan) to San Chai (Barbie Hsu). I was really addicted over the series and the necklace so this made me purchase this custom made necklace

This was beautifully handcrafted by a local jewelry maker.

And a new addition to my collections…

This is from Gingersnaps, which I bought from Just G.  This is actually a necklace for kids… It’s part of their Alice in Wonderland collections.Though I can’t wear this in my everyday uniform, the shopaholic me pushed me to buy it.

How about you? Do you also wear an everyday uniform? How do you break the monotony of an everyday outfit?

I’m still new to Twitter. I opened a Twitter account for the sake of fulfilling my curious instincts. I remember my friend Anne telling me that a lot of people have been asking for her Twitter account. In one idle and boring work day, I decided to sign up and explore Twitter. At that time, I never had the idea of what will I get out of it.

Twitter is limited to one function. However, I failed to foresee and realize that the lone service Twitter provides would later on become one of the most powerful communication tools in my country and even the rest of the world. I was blinded by my criticism over Twitter’s singular function. In effect, I failed to realize its after effects; the benefits and its impacts to the community.

Gradually, I started to hear celebrities, journalists, and different organizations announcing their Twitter accounts and requesting people to follow them. Again, out of curiosity, my Twitter account became active when I started following people and organizations that interest me. I followed the official accounts of Paolo Coelho, Nicholas Sparks (whom I learned that even his unpublished works are beginning to have movie tie ups already), and Harvard Research.

Later on, I realized that Twitter does not only provide me an opportunity to type and announce my status messages. I failed to see that Twitter will keep me informed of the daily activities of people that interest me. Twitter in one way or another enabled fans like me to be informed of the activities, thoughts and the life of the people we admire. Twitter broke that impossible dream of fans to reach and communicate with the people they look up to.

Twitter also gives my daily dose of fast updated news from both the local and international level. I am easily informed of the happenings even without a TV or a radio. Remember that bloody hostage taking incident at the Quirino Grandstand? Twitter kept me updated even though I was stuck in the office. The winning of Venus Raj in the Miss Universe pageant! I easily learned the news just because I was following other people watching it. How about Manny Pacquiao’s victory? The people I followed at Twitter gave me almost live feed on the progress of the game.

On the downside, it can’t be denied that Twitter also served as a means to inflict harm to other people and even to destroying our own reputation. Remember the incident that involved Mai Mislang? She used to be a silent presidential staff. However, she became one of the most hated personalities because of just tweeting harsh things against Vietnam. How about the controversial tweets of Cristine Reyes against Sarah Geronimo? Cristine gave the entire Philippines a feast of gossips and intrigues. But I think in such situations mentioned, the users are the one to blame. Twitter’s main responsibility is to provide a platform. It’s already the responsibility of the user on how he will be able to maximize the benefit of the technology.

Twitter’s real downside is attributed on those situations when their system overloads and crashes as a result of too many users. Have you encountered anything from these,

I will never forget this whale. Seeing this message adds up to my daily small doses of irritation. I can’t send my tweets unless the birds are able to transport that gigantic creature. 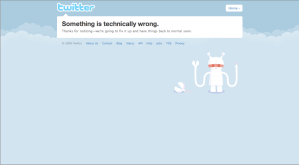 And also this robocat? This cute figure also brings in some cute annoyance which when accumulates would agitate you.

To give an avenue for self-expression through a limited number of characters is basically the function of Twitter. However, its one function provided different impacts to the community For companies, Twitter is now used as a reliable feedback mechanism. I find companies announcing the schedule of their sale, promos and answering customer complaints. Fully Booked and National Bookstore Philippines best exemplify such traits.

Different businesses in the form of web and software applications also emerged out of Twitter. TweetDeck, Hootsuite. Twitteriffic, UberTwitter are some of the alternative sites which Twitterers could use  apart from Twitter’s own webpage. During those times when Twitter’s main site was bugging, I was one of the many people who resorted in these applications.

As contained in their homepage, Twitter is the best way to discover what’s new in your world. True enough, Twitter is just a 60 character medium that provides access to a universe of lives to every single individual that enters it.